Month-end Immigration Updates for May 2021 – What did you miss? 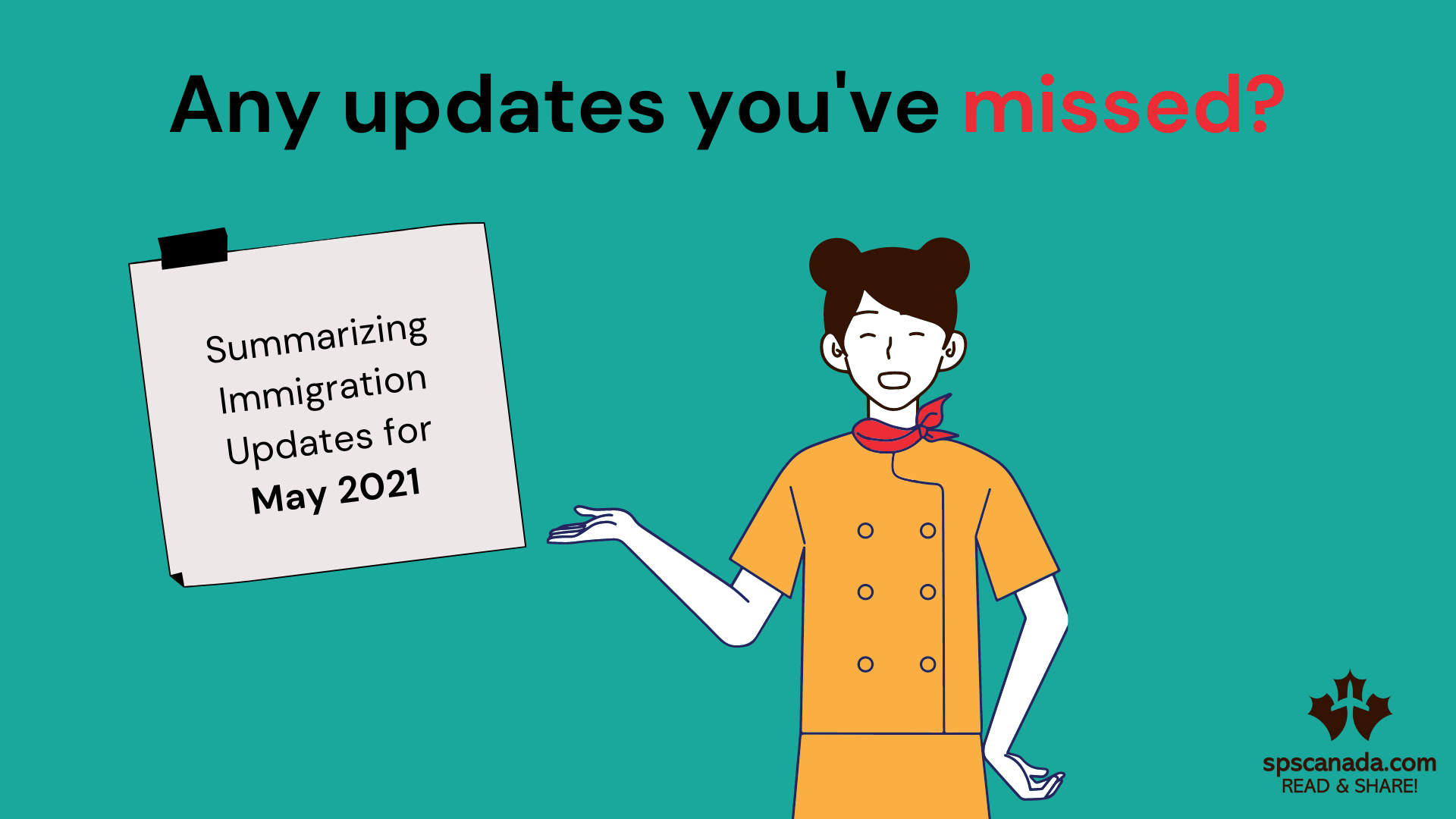 May has been a busy and yet the most popular month for many international students and essential workers as many eligible candidates took their first steps to get PR under the Temporary Resident to Permanent Resident pathway, although the stay-at-home order was extended until June 2.

There are limited spots for both English-speaking and French-speaking candidates;

However, for French-speaking candidates only, there are no limitations about spots.

These streams will end on November 5, 2021, unless all the limited spots are filled before this date.

May 7 – As of 1:00 pm, all the spots for recent international graduates from a Canadian institution have been filled.

May 12 – IRCC issued Invitations to Apply (ITAs) to 557 applicants under the Provincial Nominee Program (PNP) with the lowest CRS score of 752, which is 35 points higher than the previous draw.

May 13 – One day after the PNP draw, IRCC issued ITAs to 4147 applicants under the Canadian Experience Class (CEC) stream with the lowest CRS score of 401.

May 26 – IRCC issued ITAs to 500 applicants under PNP with the lowest CRS score of 713, which is the lowest score since March 17.

May 4 – The Ontario Immigrant Nominee Program (OINP) issued targeted notifications for applicants with a ranking system score between 458 and 467 who could qualify for Ontario’s Express Entry French-speaking skilled worker stream.

May 11 – OINP issued ITAs to candidates with the lowest score of 31 and work experience in the Expression of Interest (EOI) system pool who could qualify for the Employer Job Offer: Foreign worker stream and mentioned which specific national occupational codes (NOC) are valid for this stream.

May 13 – OINP has received its 2021 nominations allocation from the federal government, with 8,350 plus and an additional 250 nominations for temporary foreign workers who have a job in the NOC C level.

May 18 – OINP issued ITAs to candidates with a score of 77 and more in the Expression of Interest (EOI) system pool who could qualify for the Employer Job Offer: International Student stream.

May 25 – OINP issued ITAs to applicants in the EOI system pool who could qualify for the Employer Job Offer: Foreign worker stream.

May 26 – OINP issued ITAs to applicants in the EOI system pool who could qualify for the Employer Job Offer: International student stream. OINP’s target was applicants who registered for the Regional Immigration Pilot and under this stream with the lowest score of 73 in a separate draw.

May 18 – Alberta issued ITAs to 250 Express Entry applicants under provincial nomination with the lowest CRS score of 301.

May 20 – Prince Edward Island issued ITAs through its PNP to 155 immigration candidates, of which 17 are Business Impact candidates and the rest for Express Entry candidates.

May 25 – Saskatchewan invited 269 applicants in the Occupations In-Demand sub-category under the Saskatchewan Immigrant Nominee Program (SINP) with the lowest score of 65.

May 25 – British Columbia issued ITAs to a total of 370 applicants according to the two PNP draws.

May 13 – The stay-at-home order, which was announced on April 8 and planned to last for six weeks, was extended until June 2 since the number of cases did not decrease.

May 21 – Although Prime Minister Trudeau recommends that the Canada-US border should be reopened when the first dose of vaccine is taken by at least 75% of Canadians, it was announced that the restriction of travel would continue until June 21 due to the increasing cases.

Interested in learning the best immigration pathway for your profile? Simply Start your Assessment or Call (1) 905-362-9393 (Canada), +91 9586 226232 (Ahmedabad) or drop an E-mail at support@spscanada.com (Canada), support.amd@spscanada.com (Ahmedabad) for further information.