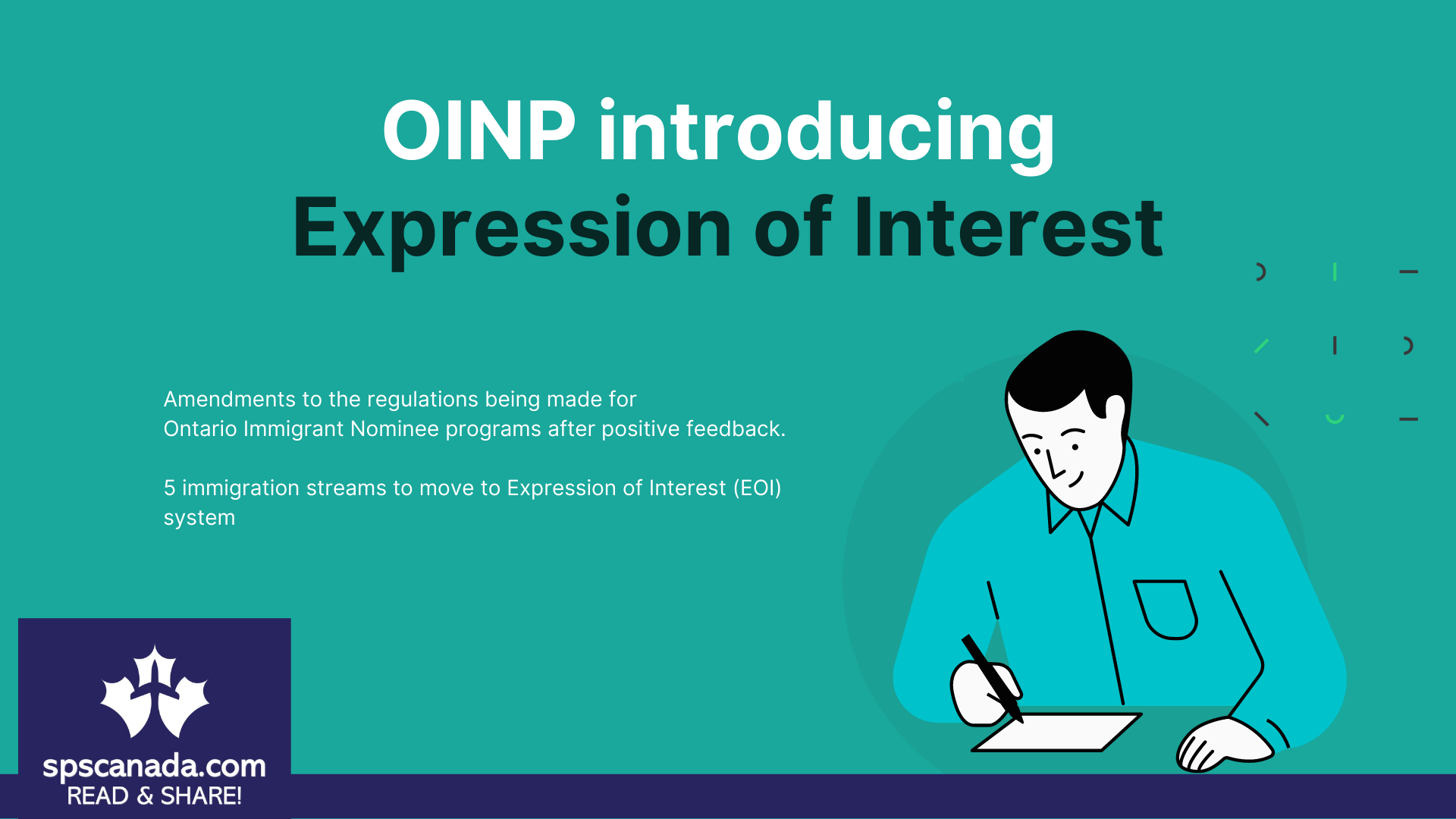 On March 15, 2021, the program filed the amending regulations under the Ontario Immigration Act, 2015 for introducing the Expression of Interest system.

Before looking at the changes, let’s first understand what an Expression of Interest is.

What is Expression of Interest (EOI)?

Simply put, Expression of Interest is a system to select skilled economic immigrants based on their qualifications and experience, and other relevant fields, which is points-based, in order to meet the labour market needs of the province. Previously, the system used first-come-first-served model and is now being improved to rank candidate’s human capital and labour market factors.

Most of the provinces under Provincial Nominee Programs are already using the Expression of Interest system for managing new registrants.

What does it mean to submit the Expression of Interest?

The director would decide to issue a general or targeted invitation for a certificate of nomination as per the defined category, based on the highest-ranking applicants in the category. If you have the set of qualifications required in Expression of Interest, you will then be requested supporting information and to apply for a certificate of nomination.

To receive a certificate of nomination from Ontario, the applicant must have been issued an invitation and have applied for the certificate within the deadline determined by the director, which will be published on the Ministry’s website.

Further details on when the streams will open, and how the Expression of Interest would work exactly and the changes that will be effective are yet to be posted.

Why switch to Expression of Interest?

With the introduction of the EOI system, it would help OINP to make significant improvements on

EOI systems are currently being used by many of the provinces under Provincial Nominee Programs – Manitoba, Saskatchewan, Prince Edward Island, and more. The main purpose of introducing the system is to make the process more predictable, fairer, and user-friendly than the current process. In addition, the system would also prioritize candidates with certain skills to meet the regional labour market need.

It was during fall 2020, Ontario started consultations about implementing the EOI system, for which it received positive feedback overall from individuals, applicants, employers, organizations, representatives, and associations. Prior to this, the OINP has also made amendments to the Ontario Immigration Act for Employer Job Offer: In-Demand Skills stream.

The Ministry of Labour, Training, and Skills Development filed on March 15, 2021, under the Ontario Immigration Act, 2015 for introducing an Expression of Interest system:

The changes to the OINP’s system would mean an improved intake system, providing a fair chance for the individuals and applicants to submit their interest and qualify under the stream for permanent residence.

Learn about your eligibility for different immigration streams and find the best way for settling in Canada as a permanent resident by starting your assessment!